In this essay I will touch upon various interpretations of important events in people’s lives, events which I name “Fate Events”. I will refer to the origin of their mis-interpretation and will also argue that incorrect interpretation has a critical positive role in the first-half of life (up until age ~35). Moreover, acknowledging that the interpretations were wrong, demands sacrifice and the renunciation of beliefs and survival patterns that up till then served loyally and enabled a person to live a relatively safe existence.

According to Anthroposophical spiritual-science, the evolution of Man and Earth is the evolution of consciousness; humanity, like Man, evolved and still does so from a child-like state of visual dream-like consciousness (that was the source of all the great myths), on to an awakened intellectual-logical consciousness state, over to a state of spiritual sense (called in Anthroposophy, ‘living thought’), that does not contradict the former but rather supplements acknowledged reality with a more profound and significant dimension.

From its inception human beings learn how to live in the material world, how to adjust to its terms and conditions, to mingle in it, to be part of it (Incarnation). The learning process occurs gradually with time, during which each developmental step also involves consciousness evolvement. The consciousness of an infant is not the same as that of a teenager, and the latter is not the same as that of an adult.

The Ur-Phenomenon (archetype) of human life is mid-life; one can not comprehend humans without understanding the inversion that occurs in mid-life, which is linked to the fact that Man is an entity comprised of both body-soul and soul-spirit elements.

Up until mid-life a person establishes himself in the world, learns its rules and adjusts himself to them, while trying to maintain his secured existence both physically and mentally. Nowadays, people’s ambitions shift from the desire to live good, happy lives that are financially and socially comfortable, to realizing their pursuit of status, influence and power, as well as self-fulfillment. These stages are linked to the first half of life and a bit beyond (approximately age 42), and are appropriate at that stage.

Entering the second half of life (Excarnation) leads to other questions, such as: what am I doing in this world? Should I continue doing what I have been doing so far? Am I really connected to myself or have I lost myself in life’s race? Am I living with the right spouse, etc. These questions and others come up as a result of the inner, even if sub-conscious, experience that characterizes that phase – the understanding that our time here is limited, and that at one point our lives will come to a close. This feeling rises frequently as our body weakens, a process that starts in our late 30’s. While in the first-half of life people feel that ‘the sky is the limit’ in terms of physical and other abilities, this sense starts to be undermined in the second-half of life.

Man holds three forces, termed by Dr R. Steiner – soul-forces: thought, feeling (sensing), and willing (actual activity). These soul-forces are intertwined in an automatic fashion. For example: a person enters a room and senses the smell of cooking gas; immediately a thought arises: there is gas, it is dangerous; this thought translates into action – a search for the source of gas leakage and switching-off the tap, opening windows, escaping, etc.

Such an automatic instinctive link serves a person’s survival and his existential security and safety; it would be strange and irrational to sense the smell of gas that may be dangerous, and not take action to remove the danger.

This sort of reasoning is not only active in the physical sense but also with regards to a young person’s mental life, as well as that of an adult who did not go through any psychological development. For example: as a girl I am insulted by a boy, who hits me, mocks me, etc (feeling). This feeling translates into thought, for example: the boy is mean, he is deliberately acting against me (thought). Afterwards, it ‘descends’[1] to the will, to action, and I decide to do something, either fight back, or avoid reacting, or flee.

This type of survival-mode connection between the three soul-forces enables a person to secure his physical-mental existence. Part of the mental security expresses itself by the inability of the child to acknowledge any bad deed or evil done by him, and hence projects it onto others. He will always claim: ”he started…”, “he is bad…” etc. Taking responsibility over evil and lack of self-morals requires one to go through a brave process of self-evolvement and daring introspection capabilities. This capacity is not required nor is it advisable for a child, as it undermines his existential security.

The second half of life revolves more around development than survival. This is the time to bravely face and fulfill the demands of the spiritual entity within us. A pivotal and most meaningful demand is to separate the soul-forces: thought, feeling and willing, that till now were linked instinctively.

What does that mean?

Let’s say that during a conversation with our spouse, we are offended. This wound is obviously linked to the soul-force we call: feeling. The automatic thought that accompanies it is usually: he wanted to hurt me, he is evil, he is mean, etc.

Here, between feeling and thought, we have a first opportunity to break the automatic bond. We are supposed to ask ourselves: is that really so? Does the fact that I was hurt necessarily indicate that the other tried to hurt me?

Maintaining the suspension between feeling and thought allows the breakage of

the automatic bond between them. Obviously, once broken, it becomes easier to untie them from acting\doing (the response of the force called “willing”). If the other did not really mean to hurt me, then there is no need to act in order to repay him, or alternatively to move away from him.

The process of separating soul-forces is not a one-time event nor is it absolute; it requires a continuous process of repeated work on the automatic links in our lives.

What is the significance of untying the automatic link between the soul-forces?

First and foremost the ability to sense a feeling without projecting it and blaming others, enables us to experience it lucidly, as a defined specific feeling, and not as a chaotic blend of feelings. Next, we must name it, for example: I felt abandoned, I felt belittled, etc. Once we disconnect the hurt sense from relating deliberate hurtful intention to others, it is possible to examine whether the feeling that arose might be a repeated motive in our life, or whether it was specific only to the event that provoked it. After concluding painful processing and recognizing it as part of our life, we must continue to search for its linkage to our destiny, our fate, and the clue it provides us as for the possibility of development and mending.

Most of our lives are conducted in a projective reality, called in ancient eastern cultures, as well as in Anthroposophy, ‘the world of Maya’, meaning (Sanskrit)- the world of illusion.

Projecting ‘evil’ onto others enables a person to avoid pursuing a sincere, piercing biographical investigation and does not let him experience the painful internal conflict nor to decipher the manner in which it corresponds to his biography as a whole. The feelings that surface in a given event belong to the entirety of a person’s biography, while the other person is merely a messenger whose role is to give rise and bring about those feelings. Moreover, the biographical events are a trigger to raising feelings from previous lives that belong to a person’s Karma and his biography. Hence, often a strong sense, such as feeling abandoned, actually corresponds to certain deeds committed by that person in a previous life, that must be mended in his current incarnation. The correction\mending is expressed in two manners:

In the first–half of life, a person experiences suffering without understanding its connection to his being as a whole; this is a passive correction, the experience of suffering is the result of suffering inflicted by that person onto others in a previous life. In the second-half of life the correction is active – the possibility is there to reconcile with the suffering by understanding its linkage to mending, by taking responsibility over it, and correcting immoral acts.

Often, once this process is concluded, the painful dominant sense that accompanied us throughout life fades or even dissipates completely; also, the events that tend to raise that sense, cease to occur. In addition, one comprehends that his interpretation of neutral events was colored till now with that biographical feeling, and he can stop projecting it, or at least become aware once it surfaces and be able to confront it with a different voice that asks: perhaps not?

Obviously, all the above is pre-conditioned by the correct separation of the soul-forces.

“Thus the organs of thinking, feeling, and willing become individualized; their connection henceforth is not maintained by laws inherent in themselves, but must be managed by the awakened higher consciousness of the individual. This, then, is the change which the student observes coming over him: that no connection arises of itself between an idea and a feeling or a will-impulse, unless he himself provides one. No impulse urges him from thought to action unless he himself in freedom gives rise to this impulse. He can henceforth confront, devoid of feeling, a fact which before his training would have filled him with glowing love or bitter hatred; and he can remain impassive at the thought which formerly would have spurred him on to action, as though of its own accord. He can perform actions through resolutions of the will for which there is not the slightest reason for anyone not having undergone esoteric training. The student’s great achievement is the attainment of complete mastery over the combined activity of the three soul forces; but at the same time the responsibility for this activity is placed entirely in his own hands.” (1). 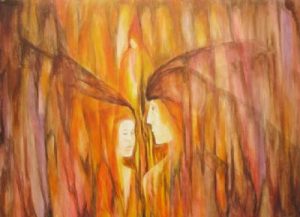 1- R. Steiner – Knowledge of higher worlds and its attainment pp 97 , written in 1904, translated in 1947.  http://www.hermetics.org/pdf/steiner/Rudolf_Steiner_-_Knowledge_of_the_Higher_Worlds.pdf

11 The word indicates that acting is carried out through the limbs, the legs flee, the arms move, etc